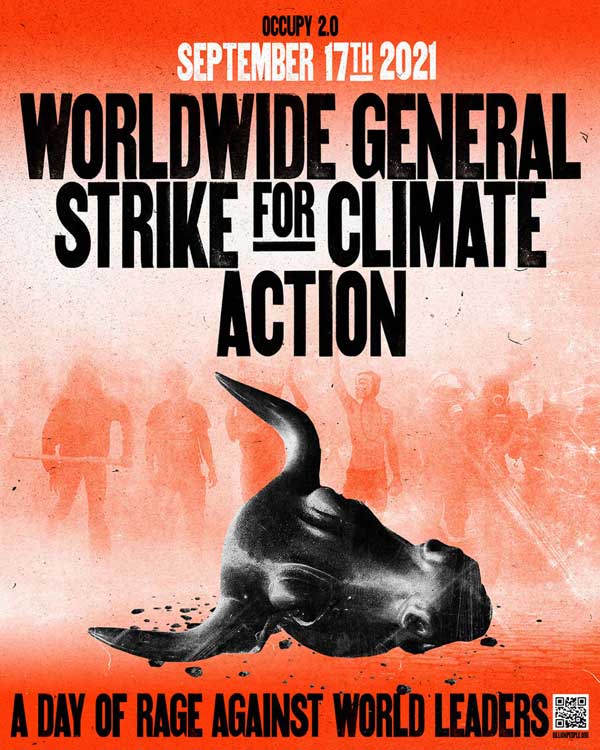 Worldwide General Strike - A Day of Rage Against World Leaders.

Alright you redeemers, rebels and radicals out there,

Ten years after Occupy Wall Street one thing has become painfully clear: the people in charge of our global system have run it aground.

Ecosystems are crashing, financial markets teetering, climate wars breaking out. Suddenly humanity is in a Code-Red Emergency and our world leaders haven’t got a clue about how to get us out of it.

But this one will be a little different. Instead of marching in the streets and commandeering parks, we’re calling for a Worldwide General Strike — A Day of Rage Against World Leaders.

On September 17th, everything simply ... stops.

We bring the world to a standstill!

And then, as revolutionary promise hangs in the air, we deliver this ultimatum to our leaders:

This six-pronged plan is our only hope of pulling out of the death spiral we’re in.

Blast it all over the internet.

Print out multiple copies and plaster them all over your city, your neighborhood, your workplace, your campus . . . Slap this ultimatum on every lamppost, bank window, storefront and government-office door.

Let everyone on the planet read it, face it, own it, acknowledge it, honor it!

Then, at COP26 in Glasgow this November, if our leaders refuse to move on the Code-Red Emergency and agree on urgently needed cuts to emissions, We the People of the world will rise up and bring their doomsday machine to a sudden shuddering halt.

And on its ashes, we’ll build something new.